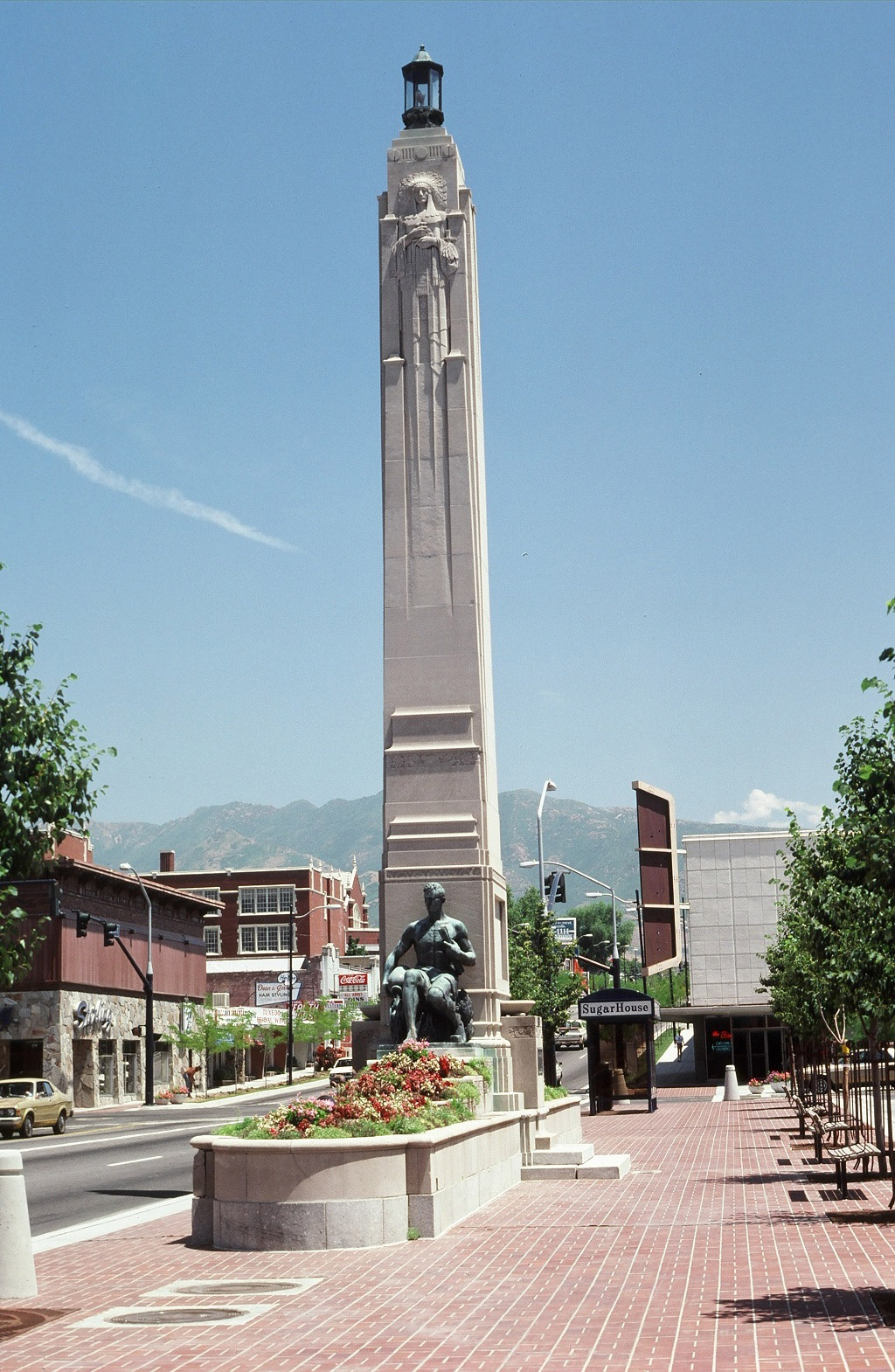 Sugar House got its name from an early pioneer attempt at farming sugar beets for sugar. The sweet stuff was a rare commodity in pioneer days. Early Mormon settlers decided to purchase the machinery used in a newly invented process to produce sugar from sugar beets. A mill was built to house the machinery in current downtown Sugar House. The process was a total failure and in the summer of 1855 and Brigham Young ordered the mill shut down. The old sugarmill building was converted to a paper factory in 1860, then a bucket factory and finally a machine shop for the Utah Central Railroad until 1928.

The Obelisk stands approximately 200 hundred feet east of the original site of the sugar mill. Millard Fillmore Malin (1891-1974) was the sculptor of the monument. He was Utah’s most prominent sculptor. Malin studied at the University of Utah where he met his future associate Edward Anderson. Malin dropped out of school to pursue art in New York City. After his studies in New York he traveled south and worked with famed artist Gutzon Borglum, the artist who is responsible for Mt. Rushmore. After several years of honing his craft, Malin returned to Salt Lake city where he reunited with Anderson.

When he returned to Salt Lake City, the country was in the depths of the great Depression. The Sugar House monument was commissioned as a small “make-work” project that developed into a sizable public monument. In order that the city might have the finest monument possible, Malin commissioned the architectural firm of Anderson and Young. The subject of the monument was the beginning of the sugar beet industry in western America, which started a mere 200 feet from the monument’s location.

Malin describes the monument as “a fifty foot shaft topped by a light. Near the top, the shaft blended into two Indian figures in relief, about eight feet tall, representing the passing of the red man. The Indian facing eastward, militant, holds war implements, and the one facing westward, defeated holds a peace pipe. At the foot of the shaft, facing eastward and westward, are two eight foot figures. The female figure facing eastward represents the Salt Lake Valley in all it’s productiveness… The male figure facing westward, pouring water from an urn over a wheel, represents a mill builder… On the sides of the shaft between the two figures were two bas-reliefs representing, on the north side, the original old sugar mill, and on the south side, a fur-trading scene in Mr. Smoot’s old trading post which once occupied that corner. (The latter plaque has never been completed. The one on the north side, representing the old sugar mill, was added to the monument in 1948…)”

The monument was completed in 1930 but wasn’t formally dedicated until 1934, the delay due to waiting for bronze figures on the sides to be completed.

The plaque reads, “May the spirit of this courageous venture continue to characterize this community.”