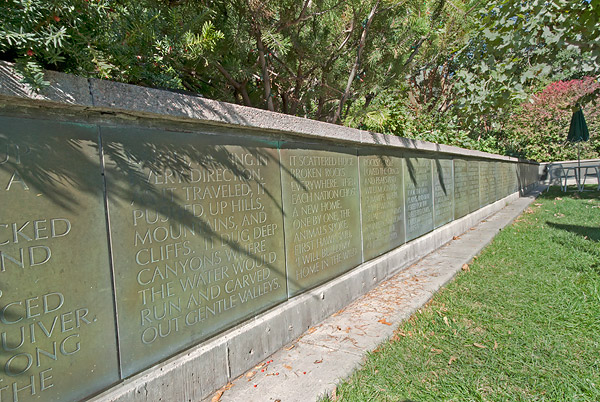 Located in the central area of the Gallivan Center, artwork appropriately titled, “Story Wall”, consists of two sections of bronze plates, engraved with Utah’s tribal legends, from the Ute, Paiute, Goshute, and Shoshone. The first section is made up of 56 plates. The second section consists of 21 plates that span across a bridge. These bronze plates are fitted side by side along a half wall surrounding a sunken grassy area on two sides. From a distance, it is hard to discern that this is more than just a bronze wall. As you get closer, and depending on the light, it becomes clear that the wall is full of engraved words.

Above the wall, in the planter, a plaque reveals the following: “These legends are based on stories told by the Ute, Paiute, Goshute, and Shoshone tribes of Utah. They are told as a method to teach values and ethics, to explain life, and to entertain. Most of these legends were collected by John Wesley Powell, manuscript 794-a, Bureau of American Ethnology, 1873. The story, “Why the Birds Built Different Kinds of Nests”, was told by Bernice Cesspooch for the Duke Indian Oral History Project, Marriott Library, University of Utah, 1968-1972.

Day Emil Christensen is a sculptor and mixed media artist. He has been commissioned for numerous public art works in Utah. He graduated from Brigham Young University with a BA in Art and Design and a Master in Landscape Architecture from Harvard Graduate School of Design. In 2008, Christensen was awarded a grant from the Utah Arts Council as part of the Individual Artists Services Grants program. He currently resides in Highland, Utah.

The following stories: How Mountains, Valleys and Canyons Came to Be, Why Birds Build Different Kinds of Nests, and Senawahv and the Snow Bird are copyrighted by the Uintah Ouray Utah Tribe. Any of these stories requires their approval.