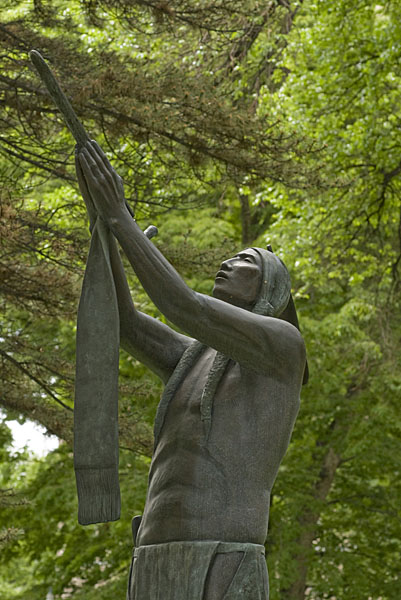 +
Allan Houser
May We Have Peace, 1992 Cast bronze

Born on June 30, 1914, Allan Capron Haozous was to become known as Allan Houser. His parents, Sam and Blossom Haozous were members of the Chiricahua Apache tribe who were held prisoners of war for 27 years. Freed in 1914, most of the tribe returned to New Mexico. Houser’s parents, however, were with a small group of families who chose to stay in Oklahoma to farm.

In 1934 Houser enrolled in the Painting School at the Santa Fe Indian School. He became one of the school’s most famous students and by 1939 his work was exhibited in San Francisco, Washington D.C., and Chicago. The same year, he was commissioned to paint a mural in the Department of Interior building in Washington, and its success led to a second mural commission there in 1940. In 1941 he moved to Los Angeles where he had the opportunity to visit museum exhibitions of European modernist sculptors such as Brancusi, Arp, Lipschitz, and Henry Moore, whose work would have a lasting influence on Houser as his own style evolved in the succeeding decades.

In 1951 Houser moved to Brigham City, Utah where he taught art at the Intermountain Indian School for the next eleven years. He continued to paint and produce small wooden sculptures, and in 1954 he was honored by the French government with the Palmes d’Academique for his outstanding achievement as a teacher and artist.

In 1962 he joined the faculty of the newly created Institute of American Indian Arts in Santa Fe where he created the sculpture department and began focusing his own artistic output on three-dimensional work. In 1975 Houser retired from teaching to devote himself full-time to his own work. In the two following decades he produced close to 1,000 sculptures in stone, wood, and bronze, and emerged as a major figure on an international scale. He had nearly 50 solo exhibitions in museums and galleries in the United States, Europe, and Asia, and he continued working until his death in 1994.